Olaus Martens (64) from Paasloo has no doubt about the matter: "The MWO treatments have caused the secondary tumours in my liver to shrink and have stabilised the progress of my illness." At the end of 2006, she began the treatments between the Multi Wave Oscillator under Wim Gelderblom at the Centre for Complementary Medicine in Zeewolde. Six months ago, Olaus bought herself her own MWO so that she could treat herself every day.

Olaus has been suffering from stomach pain for years. Ten years ago, a life-threatening situation arose because she was no longer able to eat. It was decided to operate to uncover the cause of the pain. It turned out to be a hormonal tumour (carcinoid) in the small intestine, with secondary tumours in the liver. Olaus: "The doctors created a sort of bypass so that I could eat again. The prognosis was that I had five years left to live at most because there are no treatments for carcinoid tumours.

Following the regular healthcare treatments, Olaus began looking for support from the alternative circuit. She received internal radiotherapy with lutetium at the Erasmus Hospital in Rotterdam, and she has her urine tested four times a year in Zwolle, where she is under the supervision of a stomach, intestine and liver specialist.

"Once a year I go to Rotterdam for a blood test and to have a scan done. This allows me and the doctors to keep an eye on how the carcinoid tumour is doing. I am not clairvoyant and want to keep my finger on the pulse of what is happening with regard to the cancer."

In December 2006, the secondary tumours in the liver appeared to have grown somewhat. The advice was to undergo another round of nuclear treatment. Before beginning the radiotherapy, I was to have another scan in January to see if the secondaries had grown even larger. Olaus: "During this period, I came into contact with the MWO through Gelderblom, a so-called alternative practitioner. I told Wim that I was due to have the scan in January. Prior to the scan, I underwent six treatments with the multiwave. The result of the scan was astonishing. The secondary tumours in my liver had become smaller. For me, this was the clearest proof I could possibly receive. Only the treatments with the multiwave could have done this. The radiotherapy was no longer necessary. I had my treatments with the multiwave and the results included in my file both with my specialist at the hospital in Zwolle and with my doctor in Rotterdam. And, of course, the creator of the MWO, Hessel Hoornveld, also received a copy of the results."

Things are going well for Olaus Martens. She is very active and enjoys life. For years, she ran a dynamic organic farming business with her husband. The business has been sold and her three children have left home. She now lives with her husband in beautiful Paasloo, where they run a Bed & Breakfast. She also gives yoga lessons. If you would like to contact Olaus, you can call her on 0561-451195. 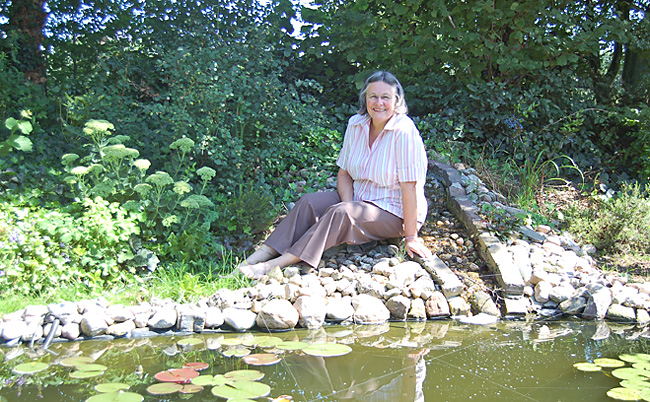