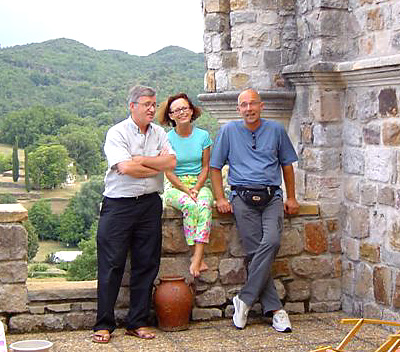 Visit at the castel of mr Bernard Lincey and his wife in august 2004.
Photo: Bernard Lincy, his wife and Hessel

Thank you for the notice which is very clear. I asked somebody in my family to write precisely all kind of interventions with the MWO (now 6 persons use it regularly, including 2 with cancers). My mother walked yesterday to the center of the town without any stick : about 2 sloping kilometers ! The doctor said to my brother : when I see how is your mother, it questions all I have learned about medicine...
Thank you for all,
Best regards, 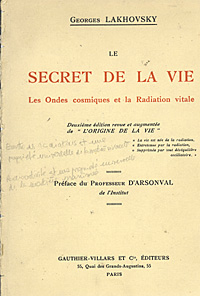 Frontpage book of Lakhovsky, found on a marked in France by Bernard Lincy. This book was the start to find an MWO to treat his mother (80 years) from cancer. She had also a stoma. Its beginning the year 2004. After many treatments in hospitals the docters send here home. So that she could die in peace.

Bernard could not believe in the message of the MD's and started to look for an MWO. He went to Holland and bought the latest version of the MWO.

After a few months of treatments she is completely recovered, no stoma anymore. The doctors in the hospital; told here that she is completely cured. His mother used also ionic colloidal silver, made by the MWO, colloidal gold and some vitamins and minerals.

Frontpage book of Lakhovsky.
Picture made by Hessel Hoornveld.